To share your memory on the wall of Charles Register, sign in using one of the following options:

Print
Charles “Chuck” William Register, age 88, passed away peacefully on January 2, 2021. The son of Charles Wesley and Lois LeVance Register, he was born on August 30, 1932 in Norman Park, GA. The oldest of five, he graduated from high school in 1950... Read More
Charles “Chuck” William Register, age 88, passed away peacefully on January 2, 2021. The son of Charles Wesley and Lois LeVance Register, he was born on August 30, 1932 in Norman Park, GA. The oldest of five, he graduated from high school in 1950, and then attended University of Georgia to study agriculture and joined the United States Air Force shortly thereafter. While completing his military service in Puerto Rico during World War II, surprisingly enough, one of his primary responsibilities was teaching the locals how to swim. It was his time there that his love of the Spanish culture developed, as he became a fluent speaker of the romantic language and enthralled with the rich, decorative colors and passionate lifestyle. When he and his future bride started a family, he would go on to name their three daughters in such fashion: Maria, Sabrina, and Anna. He later joined the Spanish-American Club in St. Augustine, and his grandchildren remember vividly the Spanish soap operas and songs playing throughout the house.
Following his military service, a job took Chuck to St. Albans, West Virginia where he met Marie Dennison, who had just graduated high school. The two were smitten, and they married in 1956. Following their marriage, Chuck and Marie moved to St. Augustine, Florida and he began work for the Florida Times-Union as a Branch Manager. Chuck worked with Florida Times-Union for nearly 40 years and over his career was promoted to State Manager for Florida and Georgia and also became one of the only two distributors in St. Johns County. During this time, Chuck’s job took the family to Jacksonville, but they ultimately returned to St. Augustine in 1971, where they would spend many happy years with wonderful friends and a growing family. His daughters remember fondly the early mornings of rolling and bagging papers for couriers, and even accompanying Chuck on delivery routes from time to time.
As Chuck continued his career with the newspaper, Marie managed several iconic B&B's such as St. Francis Bed and Breakfast, Casablanca Inn, and Villas on the Bay in historic downtown St. Augustine. History has it that when Chuck was a young paper boy in Georgia, he came across an old brass bed frame on one of his routes, and his curiosity for antiques was planted. Much of his lifetime was committed to collecting and moving art and antiques. Chuck and Marie spent countless hours organizing estate sales and liquidations, running local antique shops, browsing early morning yard sales, and Chuck even had a small booth for many, many years at Anastasia Antiques (what is now Bizarre Bazaar) next to historic Osteen’s Restaurant. From glassware to oil paintings to furniture, he had a broad scope of knowledge and never ceased learning. He studied with local artists and historians to identify styles and perfect the skill of matting and framing pieces, which he continued to do into his later years in life. He would also often include information on the artist and subject matter on the back of the frame so a future collector would know the history and relevance of that particular piece. His collection included many local area artists such as Emmett Fritz with depictions of St. Augustine architecture and historical streets. Chuck had an eye for finer things in life and their homes always had impeccably-placed, prestigious furnishings and art pieces. With Chuck’s expertise in paintings, antiques and collectibles, and Marie's flair for interior design and hosting, the pair were a dynamic duo.
His greatest joy was the love of being surrounded by friends and family. Chuck and Marie were known for hosting humble but grand gatherings, from family reunions to Christmas dinners, to simple evening get-togethers watching the sunset.
Chuck was preceded in death by his parents, his wife, Marie, his sister, Betty Hosmer (Dick), and brother, Jimmy Register. He is survived by his sister, Jackie Ward and brothers, Larry Register and Garry Register (Janie), his three daughters, Maria Mayer (Paul), Sabrina Crosby (Frank), Anna Stilwell (Tommy), his grandchildren, Erica Watson (Lance), Ali Martin (Jerry), Paisley Fodor (Andrew), Tyler Crosby, Skye Stilwell, and Sally Reed (Trevor), great grandchildren, Mason and Cody Starke, Hazel Marie and Van Alden Fodor, and many wonderful cousins, nieces, and nephews.
A celebration of life will be held at a later date. In lieu of flowers, please consider sending donations in Chuck’s memory to San Mateo Presbyterian Church, P.O. Box 57, San Mateo, FL 32187 or Roberts Hospice and Palliative Care of Palatka, 5111 Crill Ave., Palatka, FL 32177.
Arrangements are under the direction of Johnson-Overturf Funeral Home in Palatka.
Read Less

To send flowers to the family or plant a tree in memory of Charles William "Chuck" Register, please visit our Heartfelt Sympathies Store.

Receive notifications about information and event scheduling for Charles

We encourage you to share your most beloved memories of Charles here, so that the family and other loved ones can always see it. You can upload cherished photographs, or share your favorite stories, and can even comment on those shared by others. 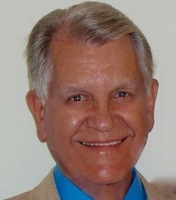