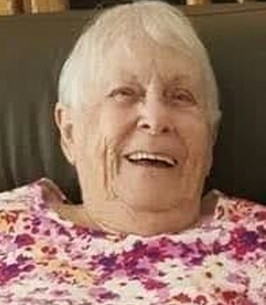 Elsie A. (Bartoswicz) Newcomb, 94, of Dunnellon and formerly of Interlachen, passed away on Tuesday, June 7, 2022, at the home of her daughter Pam and son in law Frank Fuller where she had lived since March of 2017. Elsie was born in Providence, RI the daughter of the late Earl Green and Grace Dunbar.

She outlived her sister, Doris Perry and her beloved brother, Earl Green.

She lived a full life and had many memories of traveling the country in a camper. She was loved and will be missed by many.

She was a member of the Immanuel Baptist Church in Oxford, FL. Due to health, she was unable to attend services in person, but never failed to connect via her computer every Sunday at 10 a.m. for the service.

A Celebration of Life will be held at a later date.
Memories and condolences may be expressed to the family at Elsie’s Book of Memories page at www.johnsonoverturffunerals.com .
Arrangements are entrusted to Johnson-Overturf Funeral Home in Palatka.