To share your memory on the wall of Roy Trotman, sign in using one of the following options:

To send flowers to the family or plant a tree in memory of Roy Bailey Trotman Jr., please visit our Heartfelt Sympathies Store.

Receive notifications about information and event scheduling for Roy

We encourage you to share your most beloved memories of Roy here, so that the family and other loved ones can always see it. You can upload cherished photographs, or share your favorite stories, and can even comment on those shared by others.

Posted Dec 07, 2020 at 03:31pm
Robbie was the kind of person that made you feel like you'd known him forever even if you just met him. We will remember is sense of humor and his ability to bring a group together with laughter. Bobbi & Dwight
Comment Share
Share via:
PL

Posted Dec 05, 2020 at 09:04am
Sheri, Kelley and family;
It was with great sadness that I learned of my dear friend and classmate's passing. Robbie was always kind and supportive, the first one to ask if you needed anything. I so fondly remember going to Papa and Nana's for Sunday lunch and working in the orange grove. Robbie and I both learned to drive manual transmission on Papa's truck and we both had so much fun.
Robbie and I were in school together from first grade at St. Monica's, Junior High and graduated with the great class of PSHS 1974. And who can forget all those great times at Bernice and Roy Sr.'s house on Kirby St. and Mosely Ave. I will miss my friend, but will hold onto all the wonderful memories and be thankful for having the incredible fortune of being his friend and the great times we had!
My thoughts and prayers are with you and al the family for God's peace.
Phil Leary
Comment Share
Share via:
B

Sheri and family, I am so sorry to hear of Robbie’s passing. I think of your family often, especially when I go by your former home, and on Saturday nights. Much love to you all, Joyce Oliver 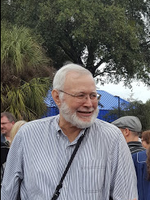