To share your memory on the wall of Thomas Davis, sign in using one of the following options:

To send flowers to the family or plant a tree in memory of Thomas Mitchell Davis, please visit our Heartfelt Sympathies Store.

Receive notifications about information and event scheduling for Thomas

We encourage you to share your most beloved memories of Thomas here, so that the family and other loved ones can always see it. You can upload cherished photographs, or share your favorite stories, and can even comment on those shared by others.

Posted Nov 10, 2020 at 04:25pm
To Donald & Lee....Words can't express the sorrow I share with the passing of your dad. He was a great man and like a 2nd father to me as well. He was a very proud & independent father who cherished his time with family & friends. He raised (2) wonderful children and was a devoted husband to your mom during their 55 years together. I will always remember our times on the Palatka golf course and many stays at the Coquina, while growing up under the watchful eye of Tom & Donna (Mams) Davis...I feel blessed to have had the opportunity to know your parents and to have become a better person because of it. I share in your sorr0w, yet I know he goes to a better place and will now be able to reunite with your mom and perhaps tee it up with my Dad who died 29 years to the day earlier at that golf course up above. Please accept my deepest sympathies in your time of sorrow...

Posted Nov 10, 2020 at 12:30pm
The world is a better place because of my Uncle Tommy. Donald and Lee our hearts are with you. God Bless and Love, Sally and Trenton Abbott 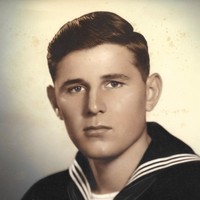